These two, who are old friends and whose daughters are also friends, will pretend to fight with one another until Hillary Clinton is crowned queen, and Donald Trump gets some more deregulation so he can take advantage of more immigrants, fuck over more Americans, and pay even less in taxes.

The plot was so obvious and painfully upsetting that I wondered how anyone took sides. I mean, really? People really jumped on the Trump or Hillary bandwagon and argued with each other that one or the other of these jokers was a worthy leader?

But then, they DID play it up and pretend that they had a lot of conflict between them (while undoubtedly laughing about it behind closed doors.) 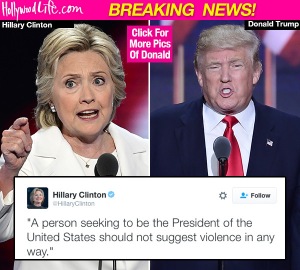 I can’t understand how the American people were so easily fooled. I mean look: They are both members of the 1%. They don’t care about you. They aren’t running for office to help you.

They don’t work. They have never had jobs. They live off family money and order around their servants. These people live a life that you can’t even imagine, and they absolutely don’t even know a thing about the “working class,” nor do they care to. They say “working class” the same way we say “dirty fucking cuntrag.” Because the working class is disgusting to them. They are truly revolted by you going to work like some kind of animal, punching a clock and not even having servants to wash your clothes! You’re just a filthy little cog in the machine, and they plan to stand on your back and use you to keep their businesses running and their interest rolling in on all that inherited money from their mommies and daddies. But they don’t care about you.

I think some people are actually starting to understand this, since Gary Johnson and Jill Stein have followings. I do think it’s starting to become clear that they one percent candidates are not even a little bit interested in helping us.

But what I think people haven’t yet taken to heart is this:

They are standing on your backs. You are the workers. You produce the things. You go to work. You make saws, build buildings, assemble cars, make microchips, and do medical research.

They don’t do anything.

Not one single thing. Really. They live off of investments and pass money from one generation to another in trusts so that they don’t have to pay inheritance taxes. They are useless sponges living off of your hard work, and they produce nothing. They create nothing. They do nothing.

For most of you, if you ran the business you currently work at, you could do a better job than the one percenter who runs it. Why? Because you actually know the business. You didn’t inherit it but never work a day in your life. You are part of it, and so you could more easily make good choices.

So much productivity is lost due to bad corporate policy, and that is entirely the fault of the one percent doing a poor job of running things. They must be one of the most inept ruling classes in all of history because they are destroying this country.

I say no more. I say we stop letting them push us around. They don’t have jobs! They’re useless! Why should they tell us what to do? Let’s start demanding that they listen to us.