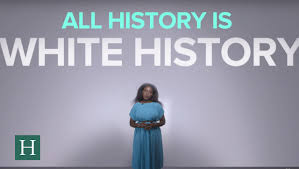 I speak up a lot about how minority groups deserve rights. White people say this is “divisive” and causes discord. And here’s the thing: It shouldn’t.

If someone from a minority group comes to you and says “Hey, that is racist and it hurts my feelings and disparages my culture,” you should be able to hear that. Not as an insult, or as an attack; but as what it is: A plea for respect from a group in a worse position than yourselves.

Sometimes a minority group can be hostile in the way that they speak. Plenty of folks from the Black Lives Matter movement have used tactics designed to upset you, in order to help their movement gain attention.

Even then, it’s not an attack on you.

I need you to understand this because it is really important.

Minorities are not attacking you when they ask for rights, no matter how loudly they shout or how little you like the way they say it.

This is just like how men try to make feminism about hating men. But of course, feminists don’t hate men. That is just a way to disparage and discredit them because they want equal rights (and men don’t want to give them equal rights.)

The same is true for minorities.

We are not attacking you. We don’t hate you. We are not being “reverse racist.”

Asking for equal rights is not a hostile act. 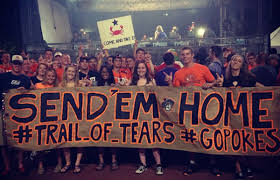 The banner held by the students above is painful. The fact that sports teams are named “The Redskins” is offensive, and the fact that folks thought it was okay to “send them packing” on a “trail of tears” is beyond uncool.

And when I say that, I am not attacking you.

I am telling you that Native Americans have the right to respect.

I need for all of you white folks to understand that, because a lot of you have been acting as though it is a direct attack on you as a person if I say that my ancestors where murdered.

Look; that is my history. You can’t take my history away from me just because you don’t like to talk about it. It is part of who I am. My ancestors used to walk this land and live in harmony with it. And part of my history is things like general Custer saying “The only solution to the Indian question is total extermination.” The Trail of Tears is part of my history, as is the Sand Creek Massacre.

White men making names for themselves “killing injuns” is part of my history. 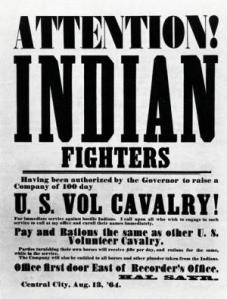 I understand that you don’t want to look at what your ancestors did. You want to think of them as peaceful settlers.

You have re-written history to make general Custer into some kind of hero, instead of the vicious killer of children that he was.

But that doesn’t change what happened. It doesn’t change that fact that white people tried to exterminate my people, and they enslaved black people (and then segregated them.) 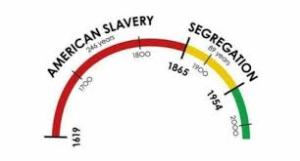 We have as much right as you to talk about our history.

And since no one screams at you that you are “attacking us” when you celebrate Columbus Day (the celebration of the start of a genocide that nearly wiped out all Natives,) how can you turn around and say that wanting our history taught in schools in an attack on you?

When we ask for our history and culture to be taught, this is not an attack.

When we talk about what has happened in the past, this is not an attack.

When we ask to be included in American culture now, that is not an attack.

We are just trying to be heard.

Yes, you may feel threatened.

You have dominated and subjugated all of us for so long that you don’t even realize it anymore.

Thinking about sharing this country with us is hard for you because it is new.

Thinking about including us in American culture is hard for you because it is new.

But we are still not attacking you when we ask for a seat at the table.

That means you have to deal with us, and accept that we are part of America and we’re not going to shut up about it, no matter how much you want us to.

And it’s not an attack for me to say that. It’s just how it is.

We are all in this together. This country belongs to all of us. And all of us have a right to have our history taught, and our stories heard. We are a country of mixed heritage, and we always have been.

Yet in the past, our voices and our songs were silenced with guns.

We still exist in spite of everything. We are still here. So now it is time to accept that, and let us join the dialog.

It’s still not an attack on you.

This is our country. All of us. And you’re going to have to accept that and allow us the same rights and freedoms that you have, because we’re not going away and we will keep fighting. And that is still not an attack on you. It is just how it is.

Why can’t you just accept it and let us all live together in peace?