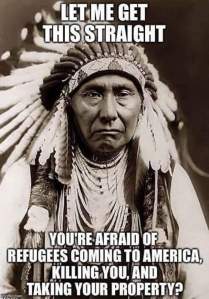 I have a lot of very mixed feelings about immigration. The Native American part of me wants to scream at white people who are against immigrants coming to the USA because they are immigrants themselves. I want to say that it’s not fair for them to say the US is a place for immigrants when they are the ones coming, and then want to close the boarders when non-white people try to come.

In particular because I grew up in Arizona, I want to lose my shit on people who rail against Mexican immigrants because until 1912 Arizona was not part of the USA at all, and it was only Mexicans and Native Americans living there.

In fact, before there were white people we had civilizations, trade routes, and a thriving culture. Not that you learn about the Anasazi (ancient people who are gone,) or any of the tribes and trade routes and civilization that came after. Until white people came, they like to pretend that nothing was here.

Leaving behind the USA and all it’s issues, how do other countries approach immigration? Honestly, there is not a lot of logic in most immigration policies, and the bigger the country, the harder it is. But still…

In South Korea, it’s very hard to immigrate. This is true of a lot of countries. Most places want you to invest in land or a business, or show in some way how you will be valuable to their society (like having an advanced degree in something they need.) Canada puts out a list every year of the kind of workers they are looking for; be it nurses or teachers or engineers.

This is a sensible approach and part of me wants very much to say that the US should do the same kind of thing, giving priority to people with advanced degrees in fields we need or experience in labor we need.

I guess that’s discriminatory and wrong in some ways, but in other ways it seems like maybe other countries have the right idea.

But then there is our reputation to consider:

“Give me your tired, your poor, your huddled masses yearning to breath free, the wretched refuse of your teeming shore. Send these, the homeless, the tempest-tossed to me. I lift my lamp beside the golden shore.”

Honestly, when I read that it makes me sort of tear up a little inside.

I mean, think about what this is really saying. Our motto, inscribed on our Statue of Liberty, is asking for the least among the world to seek safety in our country. It’s noble, and it’s inspiring, and it’s what the world has expected of us since white people took over our land and claimed it as a home for refugees.

If we are going to change our immigration policy at all, don’t we need to take down the Statue of Liberty? Isn’t that an obvious and necessary requirement before we take any kind of selective immigration or anti-immigration stance?

And, if we do that, then won’t we have to re-think our soul as a country?

Because I don’t think we can go on having the Statue of Liberty out front, while kicking folks out the back door.