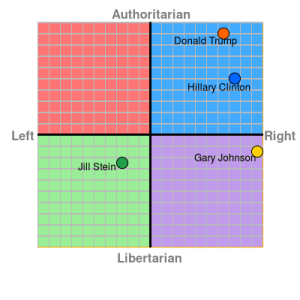 Hillary Clinton and Donald Trump are nearly the same in ideology.

Lots of people will try to convince you that this isn’t true, but it is. They both fall in the blue square (above), which is where right-wing authoritarians are. This is also the same square that Adolph Hitler fell in.

Take a good look at the map above, which is from The Political Compass, a non-profit site based in the UK.

Bernie Sanders used to fall right next to Jill Stein in the green square, when they still counted him as a candidate. This represents a Democratic Socialist agenda, similar to that of all the first world countries on Earth except for the USA.

This is really very meaningful, because it tells us that the “lesser of two evils” is literally still voting for evil.

If you look at this chart, you can see that Gandhi falls in the same square as Jill Stein and Bernie Sanders. They represent an ideology of  inclusion and of working together.

I don’t see how anyone who has supported Bernie Sanders until the convention could turn around and support Hillary Clinton or Donald Trump.

I can’t see any other choice, given the facts of the situation. I am not saying that I am a political expert, but I did write a book about US politics, so that must give me some credibility. I hope you will follow me, and take the movement over to the Stein campaign.

Remember, this assessment is from the candidates own words, and their own policy proposals. It is non-partisan and not bias.

Bernie Sanders was “Libertarian Left” by the UK terms used. Let’s vote someone who falls in the same square!!!

2 thoughts on “I Am Still a Liberal Progressive”