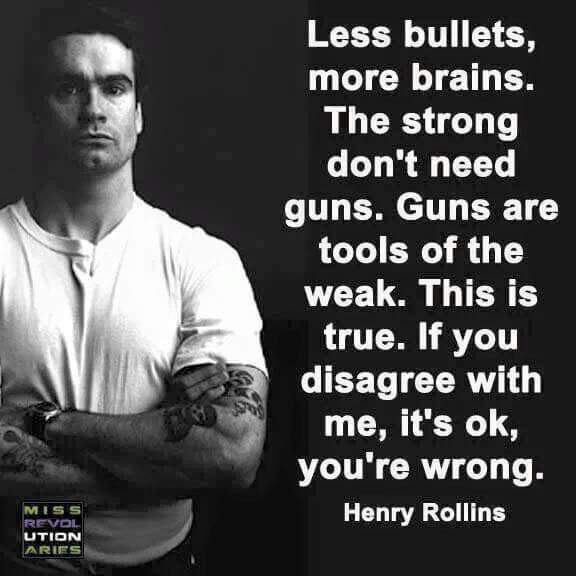 I saw this and I had to smile. I have always felt this way. Having talked my way out of a great many fights, and a great many more serious altercations; it’s very important to be strong and not hide behind a gun.

In all the cases at some of my old jobs where a gun was pulled, my having a gun would have made it worse. It escalates the situation rather than deescalating it.

Here’s a story to highlight it:

A friend of mine who is Cherokee and crazier than me was working graveyards at a gas station. His name is Jeff, and you don’t want to fuck with Jeff. Anyway, this guy comes in, and he pulls a gun on Jeff and says that he is robbing the store. It’s not Jeff’s store. He doesn’t care about the $30 in the till. But he is really insulted that this guy pulled a gun on him. Like, how dare he?

So Jeff jumps over the counter, knocks the guy down, and stomps his femur. He actually snapped it! It’s the strongest bone in the human body, and he snapped it. And he picks up the gun and walks away to call the police mumbling “That will teach you to point a gun at me…”

Now like I said, Jeff is crazy. We don’t mess with Jeff. And I don’t think that he needed to stomp the guy. He could have just disarmed him as I have done in similar situations.

Still, the guy is still alive, though perhaps walking a bit funny.

Thing is; if Jeff had a gun, he might have shot the guy. He was insulted that anyone would point a gun at him, and he was angry. Emotional situations can provoke emotional reactions. That’s just how it is, you know?

So stop being afraid of your fellow human beings and learn to talk to them. Let’s all disarm each other and just talk like civilized men.