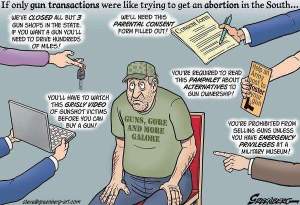 Ever since the mass shooting in Orlando, I have been furious.

At first, I was furious that another mass shooting had occurred in my country, and I felt powerless to stop it. I was mad for the families, the friends, and anyone who lost someone. To have a gay club attacked during Pride… I just couldn’t stand it.

However, then something happened that happens after all mass shootings. The crazy gun nuts came out of the woodwork to talk about how this tragedy was not caused by guns, and how no one better say otherwise.

Well, I am sick of their arguments. I am dead sick of all of them. So I present the comic above.

If you want to own a gun, you should have to go through as much, if not more, bullshit than a woman who is having an abortion.

People should line up outside the gun store with pictures of shooting victims and shame you for wanting to buy a gun. You should have to fill out endless forms. There should be waiting periods and regulations on every aspect of the process to make it as difficult as possible. New laws should be proposed all the time involving restricting your right to own a gun, and it should be hard to keep track of the laws in your state, so that there is a good chance you’ll get there and people will refuse to help you, and tell you that you should be ashamed of yourself.

That is what it should be like to buy a gun.

It should be harder than getting an abortion.

Because no abortion ever killed 49 people in under a minute.