Which white guy in the photo above is the “good guy with a gun?” Can you tell? How do you know? If you have a doubt, and you’re not sure, then isn’t it terrifying to have to stand next to him and worry “What if he is the bad guy with the gun?” Isn’t that a state of living in fear and torture that is unacceptable for any human being?

Because I think it is.

I don’t like having armed people just hanging out in my coffee shop or my grocery store. It feels like we are all in occupied Palestine, which I don’t think I would wish on anyone. And yet, in a land where we are supposed to be “free,” we’re not even free enough to feel safe when we’re out in public.

And yet, even if we changed all that, it still wouldn’t be okay. No amount of changes to society will ever make it okay to have armed men in my coffee shop. Particularly when I don’t know if they have even had training, because they aren’t in a uniform. So they could have just bought the gun, have no idea how to use it, and be planning to use us all for target practice. The point is: I don’t know. You don’t know. And yet, we’re supposed to be okay with it.

There are places where everyone carries a gun. Don’t believe the NRA nut jobs, because Switzerland is not one of them. But there are places.

Iraq and Afghanistan are good examples, but of course Syria is full of guns as well.

And where do those guns come from, I wonder? In places where everyone carries a gun, how do they get them?

Well, that would be the US. We actually sell most of the guns in the world. So we’re the reason that all those war zones are flooded with guns. And, as it happens, they still have less than us. The US has more guns per person than any other country on Earth.

So by a lot of lines of reasoning, you would be less likely to get shot in Afghanistan.

From here, it seems to follow that we have to talk about how there are other ways to kill people. Because obviously, we have to follow the NRA script, don’t we? So they want to scream about knives and cars being dangerous, right?

Well let’s start by establishing that you can not kill 49 people with a knife. At least, not in a few minutes. If you were given a few weeks, then I do think you could. But there are no mass stabbings, and there never will be. For one, it is much harder to kill someone with a knife. And for two, you have to get in close to the person and risk them being able to fight back, which we know these worthless mass shooter pussies couldn’t handle.

So there you have it. Knives are not a problem.

But what about cars? Couldn’t you try to hit people with your car?

Well, it doesn’t look cool. No one in a movie ever drove around hitting people with a car. It’s hardly as exciting as shooting up a crowd with a gun, the way people do in all the movies. 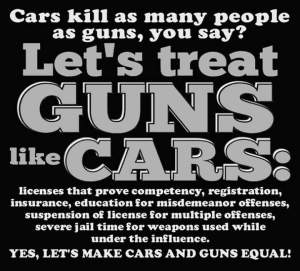 In that case, you’ll need to learn how to use one before you can buy one.

You’ll need to get a license.

These are called reasonable restrictions on a right, and they apply to everything. That’s how we live in a society. We restrict dangerous things, and we make laws so that we can all live together comfortably.

So yes, if we treated guns like cars, that would be a big step in the right direction. And don’t tell me that you’ll buy fertilizer instead and make a bomb, because fertilizer has been a controlled substance since a white Christian named Timothy McVeigh blew up a daycare with it. So no, you can’t do that.

I think it all comes down to what we learned in Kindergarten. We learned to use our words instead of hitting. I think that was a really important lesson, but that some of the slower kids in class must have missed it.

I think we know that all those folks who carry guns around everywhere are just white guys with tiny dicks who feel sad about it. And they’re dying to kill someone so they can feel manly, even though their dicks are really tiny.

And here’s the thing: My right to not get shot trumps your “right” to carrying a gun around just so you can feel better about your tiny penis.

One thought on “Living in Fear”