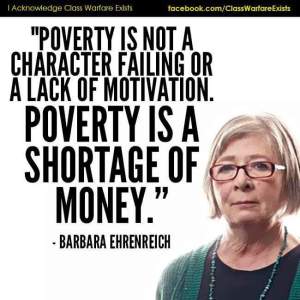 It is true that I am a world traveler with nonsense around my house from all over. It is true that I don’t live in the US. I have two college degrees and I actually have a pretty cool life.

However, it was not always this way.

I was really poor growing up. Like, desperately poor. For awhile when I was a teenager I slept out on the streets because I just didn’t have anywhere to go. I lived in the garage of a drug house. I lived in a duplex so run down that the ceiling actually caved in on us while we were sleeping and we had to dig our way out. And, I lived in places where the ghetto bird circled all night. I have been so poor that I could see my ribs, and my stomach was riddled with ulcers because I wouldn’t eat for so long that the acid would start to digest my stomach lining.

To get out of the ghetto, you have to either be very pretty or very smart.

Hard work is not what makes people successful in the US, and if you believe that it is, then stop reading my blog and go check out some fairy tales.

Look; if hard work made people rich, then every construction worker would be a millionaire. But you know what? They’re not. They’re dirt poor and their bodies fall apart young. They have shorter lifespans and nothing to show for it at the end.

This is just how it is right now, and this is why we need to get involved in politics and fight income inequality. 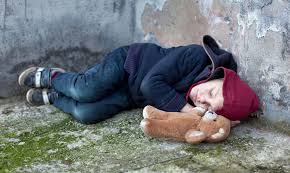 So maybe you’re asking yourself how I got out of the ghetto. Am I pretty, or am I smart? Well, guys don’t really get as much luck with the pretty thing. I mean, some of them might catch a cougar with a nice house and some money saved away, but it’s not like that’s common. Sophisticated women want sophisticated men. It’s more common the other way around because some very predatory men are actually looking for unsophisticated women. That’s a rant for another time, though.

The point is, it’s wasn’t my looks.

And listen: I am not trying to brag. I am just telling you how it is. Plenty of my friends growing up were good people. They were! They had kind hearts and tried to do good for the world even as they could barely afford to live. I have mourned the loss of all of them over time, because the ghetto eats people. Drive by shootings, police shootings, suicide in a hopeless moment, etc… It’s not a nice situation. Starving makes people desperate and crazy. It’s hard to always be chasing the last debt you couldn’t pay and never making enough to have all the things you need. There’s hard choices. Do I want power or food? Do I replace my clothes that are falling apart by getting something at the thrift store, or do I pay my phone bill? There is no good choice. No matter what you do, you lose. Good people lose.

This is just reality.

So I am not bragging when I say that I happen to be very smart. I happened to graduate High School with a 4.3 GPA and then get scholarships for college because I wrote good essays. Of course they only covered tuition, and so I worked full-time all through school and starved and scraped and struggled. However, I made it. And that is not something my friends could have done. They were good people. They were kind people. But see, they weren’t smart people. That’s not their fault. They were born that way, and not a one of us can control how we are born.

Anyhow, I run in different circles now. My friends all came from money. And when the subject of poverty comes up, even the ones trying to prove that they are “open-minded” by saying income inequality is a problem still act disgusted about the homeless or the very poor. I can’t express how insulting that is.

Some things I have heard:

“Well, I don’t give the homeless money. You know they are just going to buy booze with it.”

“I don’t understand why they don’t go get cleaned up at shelters.”

“Why aren’t they working?”

“I wish they wouldn’t sleep by my building. It makes me uncomfortable to walk by them.”

I have to bite my tongue, because if I didn’t, I would probably have to punch my friends in the face. I smile. I don’t open my mouth because I know that I am too angry. I wait for the subject to change. 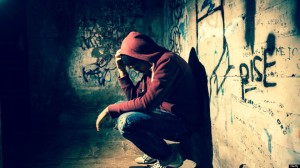 Now, I want to introduce you to an idea and this might be sort of hard, so please listen close:

I know, it seems far-fetched. How could that be when we treat them so badly? But I swear it’s true. Homeless people really are human beings.

I used to be one.

I was too young to get a job because of new laws requiring permission from your parents until you were 18 if you wanted to work. But do you think that stopped people from spitting on me and telling me to get a job? No. It really fucking didn’t. And even if I had been old enough, how could I have applied? This was before cell phones, and with no address or home phone number it was obvious to the businesses that I applied at that I was homeless. They consider that “unreliable” and won’t consider you.

People ask about foster care, but Arizona is a place where you only have two options for foster care:

1. Be used as farm labor and sleep in a barn.

2. Be raped every night.

I knew a lot of kids who grew up in foster care. Or, I should say, I met a lot of them. But they all killed themselves because humans can only handle so much abuse before they snap. In a state full of Libertarians who are all out for themselves, no one fosters a kid unless they have a sinister agenda, and that is why kids who got placed never lasted long.

So, no. Foster care never entered my mind as an option.

But look, it’s not just kids who are on the streets. 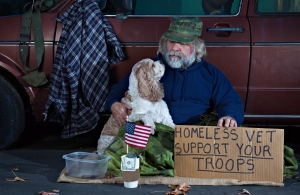 A huge amount of former soldiers end up on the streets too. This is mostly due to PTSD or other psychological conditions. However, not being able to get a job also factors in. Most former soldiers report that they have trouble finding work, because people are afraid that they will snap. And guess what happens if you keep looking for work and never find any? Well, you end up on the streets.

Sure, some people have families to save them.

And yet, many joined because they had no family safety net in the first place. Without that, you really find out how far you can fall. It’s a very long way.

Of course, living on the streets is a trauma in and of itself, and so many people who didn’t have a serious psychological condition to start with will end up with one.

Having spent a lot of time with the homeless, I can assure you most of them are victims of our horrible healthcare system, our horrible social support system, and our horrible foster care system. We are talking about victims here. Victims of a society that doesn’t give a shit.

They are human beings.

And yes, you should give them money. They might be unable to eat the food you offer them because of a food allergy. They may seriously need a blanket or socks. Money is much more helpful.

But if you won’t give them money, then you should meet their eyes. You owe them that much; all of you. You are part of the society that has failed them, and you owe them a look in the eyes and a genuine “hello.”

They are fucking people.