This is the rant that is going to be my downfall. I just know it. And yet, I have to say these things…

In countries that have less guns, they have less shootings.

You can give me all the excuses that you want and talk about stabbings and everything else. You can rail against this and tell me that I am unAmerican. You can tell me that none of my stupid facts matter because the Second Amendment to the Constitution protects your right to have guns no matter what, even if they are dangerous and the reason that shootings happen.

Countries with less guns will still have less shootings. Since I moved to South Korea I have not heard one single gunshot. I have not seen anyone killed. I have not lost any friends, nor has anyone I know. I feel safe walking alone late at night, and so does everyone else.

Are there other factors at play? Of course there are.

It’s not like there is only one factor involved in the deplorable amount of gun violence in the USA. I would never say that.

All I am saying is that you need a gun to shoot someone, and the more guns there are per capita, the more shooting deaths there are by the numbers.

Plenty of perfectly sensible people have noticed this correlation. Mark Carmen from the American Coalition for Responsible Gun Ownership is one such person. As a former service member and a former police officer, he has had his share of experience with guns. And he’s trying to convince gun owners that more reasonable restrictions like we see in Australia would help us curb gun violence.

All I am asking is that you forgo the NRA propaganda that guns are safe and they have no connection to shootings.

Then maybe visit South Korea or Japan or Europe and experience an environment where you are much less likely to be shot. See how it feels.

If you need to compare, you can even hop a plane to Syria and see what it’s like when everyone has guns.

And just… you know… draw your conclusions on the subject from there. 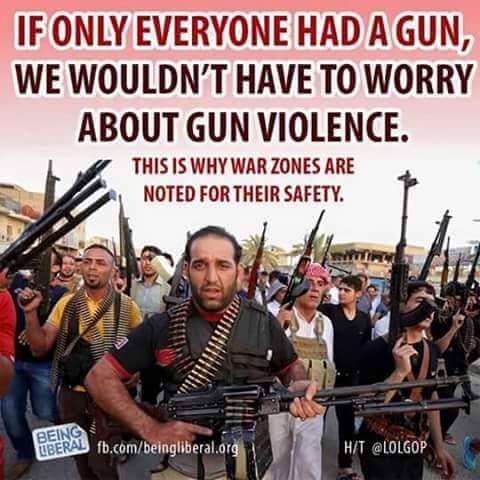